There are two types of lipid of interest to an A level biologist: triglycerides and phospholipids. Both play important roles in living organisms.

These are characterised by a glycerol molecule with three fatty acid ‘tails’. The bond between the glycerol and fatty acid is known as an ester bond and is formed by a condensation reaction where water is produced. Hydrolysis is the reverse process and used to digest triglycerides. This is very similar to condensation and hydrolysis of carbohydrates. The actual structural formula of a triglyceride is shown below, with the glycerol molecule on the left. Note that the ester bonds are shown in a dark red colour. The top two fatty acids are said to be saturated as there are no double nods between the carbon atoms. Whereas the third fatty acid is unsaturated, due to the presence of a carbon-carbon double bond. 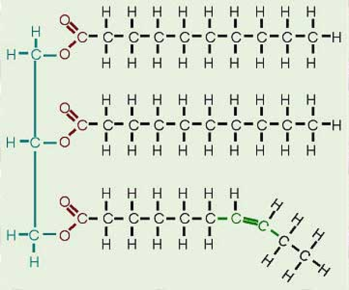 The formation of one triglyceride leads to three water molecules being produced, as there will be a condensation reaction between each fatty acid and the glycerol molecule. This is modelled in the diagram below:

As mentioned in the labels above, the head is polar and so hydrophilic, and the tail is hydrophobic. This causes phopholipids to arrange themselves as a bilayer when in water, allowing the heads to be in contact with water and the tails to be tucked away from the water. See diagram below modelling how a cell might form in water, with the phopholipids arranging themselves into a cell membrane. We will come back to phopholipids in the post about cell membranes.